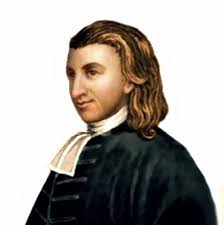 If there is one book that stands out more than others as rep­re­sen­tati­ve of the best of the Scottish religious classics it is Human Na­ture in its Fourfold State. It met wide accept­ance not only in Scot­land, but also abroad. Already in the eighteenth cen­tury it was trans­lated into Dutch. In this work Thomas Boston (1676-1732) states in an impressive way the doctrine of free grace against all legal deviations. He clearly dis­tinguishes the office of the law and of the gospel. He testifies of God’s unconditio­nal mercy and grace against the background of man’s total depra-vity.

The facts concerning the life of Boston are easily set down. He was born in 1676 at Duns, that is some miles south-east of Edinburgh. His father was a godly man, who was in the killing times imprisoned for his faith. At the age of eleven Boston was taken by his father to hear Henry Erskine preaching nearby Whitsome.

Henry Erskine was the father of Ebenezer and Ralph, who became fellows of Boston in the line they took to set forth the truth of the gospel. The preaching of Henry Erskine was blessed to the soul of Thomas Boston. In his college years he came in touch with James Fraser of Brea, a staunch confessor of the refor­med faith. In 1697 at the age of 21 Boston was licensed to preach the gospel an in 1699 he was ordained.

It was not easy for him to find a settlement because of his spiritual fervour and the power of patrons and landowners. His first charge was in Simprin. He stayed there until 1707, when he moved to Ettrick, which is a remote place not far from the borderline between England and Scotland. He remained there until his death in 1732.

At the outset of his ministry Boston lighted upon a book whose method and outlook were destined to influence his life and teaching profoundly. This was The Marrow of Modern Divinity. It dated from the days of the Westminster Assembly, and when its title spoke of ’Modern Divinity it referred to what was modern in the maturity of the Puri­tan movement. The method of dealing with law and gospel which he found in this work proved very helpful to him.

Until then Boston had warned his hearers against their sins and urged the necessity of regener­ation. He kept doing this, but his preaching got a different note. He became to preach with force and power the ample warrant that every sinner who hears the gospel has to avail himself of its gracious pro­vision.

In that days there was in reformed circles in Scotland a hesi­tancy to preach freely and without qualifications and reserva-tions the good news to all sin­ners of a Saviour who is willing to receive as many as come to Him. The Marrow of Modern Divinity was republished by his friend James Hog of Carnock. This lead to what is called the “Mar­row Controver­sy”.

The assembly of the Church of Scotland condemned the book. Is was charged that it lead to antinomianism. Boston set to the task to prepare a new edition of The Marrow with notes of himself to show that this charge was without ground. Boston, Ralph and Ebene­zer Erskine and several others defended the teaching of The Marrow. They were called the “Marrow Men” The protested against alleged antinomia­nism and reacted against a real neonomianism.

The “Marrow Men” stres­sed that a sinner cannot prepare himself for grace and that all that he does before closing with Christ for life and salvation are “splen­did sins”. The gospel is not a new law but it is the fulfilment of the law. Faith is the empty hand that is stretched out to receive the Sav­i­our. The believer receives Christ both as Saviour and Lord. The sin­ner is united to Christ and Christ’s Spirit dwells in him. He re­ceives the moral law out of the hands of Christ and loving the Savi­our he de­lights to keep his commandments.

Boston and his fellows stressed that the source of all the believer’s help is only in Christ. For our jus­tification, assurance and sanctification we must look on Christ alone. Boston shows us how to preach a whole Christ in all his glory, beauty and suitableness. He learns us that we must not separate Christ and any of his benefits. It is a powerful antidote against dis­tortions of the gospel of free grace which lead to “second blessing teaching”, antinomianism or legal­ism.

As already indicated Boston’s name remained well know after his death through his book Human Nature in its Fourfold State. The sub­stance of this work had already been preached in his first congregati­on at Simp­rin. In 1708 and 1709 it was recast and amplified and given from the pulpit of Ettrick. His physician dr. Trotter urged him to publish. it were the notes of his sermons on the human nature that seemed to Bos­ton most appropriate. Is was not till handled a bound copy of his work.

As indicated by its title Human Nature in its Four­fold State consists of four parts. In the first Boston dis-cusses the state of innocence, in the second the state of nature, in the third the state of grace and in the fourth the eternal state. In the first part Boston declares that God made man altogether righteous. Man’s under­standing was a lamp of light. Man had a perfect knowledge of the law of God.. His will was in all things agreeable with the will of God. His affec­tions were orderly, pure and holy. The original righteousness was natu­ral, uni­ver­sal, but also mutable. It was a righ­teousness that might be lost and was in fact lost by Adam’s fall.

Every imagination of the thoughts of the heart of man are evil continually. Our leading faculty the under­standing is despoiled of its primitive glory. We are blind for the glory of God and his ways. The natural man is void of the saving know­ledge of spi­ritual things. Our commanding faculty the will is now ut­terly unable for what is truly good and acceptable in the sight of God. By nature we are enemies to God and to his Son Jesus Christ. The natural man is an enemy to Christ in his office of Prophet. He does not want to lis­ten to his voice. He is an enemy to Christ in his priestly office.

Men naturally think high of their own duties and the do not see the need and value of the blood of Christ. The natural man is also an enemy to Christ in his office as King. He does not want to crucify his own lust and to obey Christ’s command­ments. When dealing about the state of nature Boston speaks in the second place about the misery of that sta­te. The state of nature is a state of wrath. That must be preached in order that sinners fly form the wrath to come. So long as we are in the state of nature it is im­possible to have salva­tion and life.

In the third place Boston speaks about man’s utter in­ability to recover himself. This knowledge is necessary for the due humiliation of the sinner so that he may see his absolute need of Christ and of the power of his grace. We must learn that we cannot be saved by our civility, morality, duties and by a faith and repentance which have sprung out of our natural powers. Let the saints admire the freedom and power of grace which came to them in their helpless condition, made their chains fall off and brought them out of the sta­te of sin and wrath to the state of grace.

In the part about the state of grace two issues are handled, na­mely the regeneration and the union with Christ. By regeneration and by union with Christ we are brought in the state of grace. Boston ma­kes a distinction between awakening and converting grace. Some have sharp convictions for a while, but these go off and they become as careless about sal­vation as ever before.

Some apply the plaster to the wound before it is sufficiently searched. They are never shaken out of them­selves and their own righteousness. There may be great flashes of joy and a reformation of life and manners where the sanctifying of the Spirit of Christ never came to rest upon the soul. But regene-ration is a real and thorough change.

It is a change of the qualities and dispo­sitions of the soul. Though in regeneration every part of the man is renewed, there is no part of him that is perfectly renewed. In regene­ration man is illuminated in the knowledge of God, of sin, of himself, of Jesus Christ and the vanity of this world. Our will is cured of its utter inability to will what is good. In regeneration there is a happy change made on the affections. Our desires are set upon God and upon the thing above.

As the child is passive in generation, so the child of God in regeneration. It is God’s work in us. We can know that we are in the state of grace by the effects of regeneration. Were we lead to see the sinfulness of sin and the exceeding glory of Christ. Are our desires after God? Just as Watson Boston states that several of the Lord’s people know not precisely the time of their regeneration and cannot trace the steps of the way in which it was brought to pass.

Having spoken of the change made by regeneration Boston proceeds to speak of the change made on men in their union to Christ. They who are in the state of grace, are united to Christ an cut off from their na­tural stock. The union to Christ is a spiritual and indissoluble uni­on. The cutting of the branch from the natural stock is performed by the pruning knife of the law, in the hand of the Spirit of God. The law shows us that we are utterly unable to be saved by our own works. We have to learn that we can no more believe than we can reach our hand to heaven.

When we are thus distressed, we are taken up and in­grafted in Christ and the spirit of faith is given to us. All who are in Christ have been broken form all confi­dence in themselves. Christ apprehends the sinner by his Spirit and the sinner, thus appre­hended, apprehends Christ by faith.

Both law and gospel are used by ingrafting the sinner in Christ. The law shows us our needs. The gospel is God’s answer to our needs. From their union with Christ several benefits flow to the belie­vers. The chief are justification, peace with God, adopti­on, sanctifi­cation, growth in grace, fruitfulness in good works, ac­ceptance of these works, establishment in the state of grace and a special con­duct of providence about them.

In the last part of Human Nature in its Fourfold State Boston speaks about the eternal state of believers and unbelievers. In this section he deals with death and the difference between the righteous and the wicked in their death. After that the resurrection, the gene­ral judgment and the kingdom of heaven and hell are handled. Boston stresses that there is no salvation outside Christ. We must in this life be united to Christ to inherit his eternal king­dom. Both the glo­ry of the righteous and the torments of the wicked are eternal. Bos­ton ends his book with a moving and passionate appeal to unbelievers to seek their safety in Christ alone.