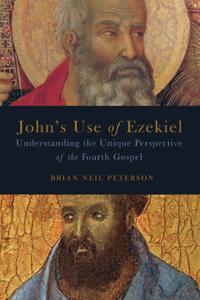 It is widely accepted that the influence of Ezekiel can be detected in the Fourth Gospel. Without doubt, the background to the discourse of Jesus on the Good Shepherd is Ezek 34. Brian Neil Peterson has done a great job in arguing that several features of John’s Gospel can be explained when we realize that the author chose to fashion his book after Ezekiel’s visions, sign-acts and oracles. This may be considered a groundbreaking study and rightly presupposes that the Hebrew Bible/LXX served as a primary literary influence for the Gospel writers.

It may be useful first to give some insight into the content of John’s Use of Ezekiel. Peterson starts by asking attention for the unique character of John’s Gospel. Together with growing numbers of scholars, I agree with Peterson that the unique features of the Fourth Gospel are not to be explained by presupposing that the author did not know about the Synoptics. John must have been aware of the Synoptic Gospels and/or the similar source material of Mark and Luke.

In this connection, Peterson challenges the notion that John is somehow less historical than the Synoptics. When he states that in some cases the Fourth Gospel must be preferred when we seek to reconstruct the events of Jesus’ life, he is actually following Papias. The preference of this early Christian, who claims to have known the writer, was based on the fact that he considered John’s way of writing less thematic and more chronological than that of the Synoptics.

In the second chapter of his study Peterson argues that John 1must be juxtaposed with Ezekiel 1-3.  The divinity of Jesus is compared with the divinity of YHWH. The third chapter highlights the parallels between the use of sign acts by Jesus in John and Ezekiel’s sign acts, while the author relates in the fourth chapter the cleansing of the temple by Jesus to Ezekiel 8-11.

The fifth chapter is devoted to the ‘I am’ sayings in the light of Ezekiel. In the sixth chapter arguments are presented that what is stated in John 17 about the unity of the believers in Jesus and in John 20 of the resurrection of Jesus and his insufflation of the Holy Spirit on his disciples must also be understood against the background on Ezekiel 37.

Peterson’s contention that John structured his Gospel around the four visions of Ezekiel can be considered convincing in the light of the other parallels between the Fourth Gospel and this prophet. Ezekiel’s first two visions can be connected to Jesus’ public ministry in John (John 1-12) and his second to visions to the Farewell Discourses and the post-resurrection scene (John 13-21). Peterson himself does not explicitly draw attention to the fact that by doing so, he is actually furnishing an argument that the epilogue of John is an integral part of the Fourth Gospel.

I agree with Peterson that there are striking parallels between the court setting in John and the larger rhetorical purposes of Ezekiel. Although he does not do so, Peterson could also have pointed to the important place of the verb μαρτυρέω in John. Coming to the concrete parallels between John and Ezekiel, he starts with the comparison between John 1 and Ezek. 1-3.

Even more pronounced than Peterson, I would put it that just as Ezekiel saw the glory of YHWH, John testifies that he saw the glory of Jesus. But I disagree with Peterson that the background of John’s use of λόγος is the Hebrew word דָּבָר as found in it the expression ‘and the word of YHWH came to’, an expression that is very prominent in Ezekiel especially. For if we see it this way, then the hypostatic character of the word λόγος is left unexplained.

I am convinced that the primary background is to be sought in the Targumim with their use of מימרא. After all, certainly in the Targumim, the מימרא has a hypostatic character. Further specification, however, does not point to Ezek. 1-3. In Targum Jonathan on Ezekiel, the מימרא does not have a very prominent place. The most relevant Old Testament passage in this connection is the narrative of creation in Genesis.

It is striking that Targum Onkelos and Pseudo-Jonathan, which speak of the מימרא in other places, do not do so in Genesis 1. Just the reverse is true of Targum Neofiti: we find thirty-one instances of מימרא in Targum Neofiti in Genesis 1-2. We may rightly assume that writer of the Fourth Gospel was familiar from childhood with the Hebrew Bible Testament in the form of a Targum. Later, he probably also became acquainted with written forms of the Targumim.

Although in the case of the prologue of John I find the parallel which Peterson sees between John and Ezekiel unconvincing, his main thesis that the macrostructure of Ezekiel had a formative influence on the Fourth Gospel remains unchallenged. The role of the Spirit in the baptism of Jesus certainly reminds us of the place of spirit in the inaugural experience of Ezekiel. In no other OT prophetic call do we have the associations with the Spirit that we do in Ezekiel’s call. I would add that we can see both in the experience of John himself and of Jesus the influence of merkaba mysticism.

Peterson suggests that there is a relation between the expression (χρόνον) μικρὸν (little (while)) in John (7:33; 12:35; 13:33; 14:19; 16:16 [twice], 17) and ἁγίασμα μικρὸν (little sanctuary) in Ezek. 11:16 (LXX) to describe the brevity of Jesus’ earthly stay. The hope of the eternal dwelling of YHWH among his people finds a fitting parallel in Jesus’ promise to his followers of his future return. J

esus himself is the fulfillment of the promised eschatological temple in Ezekiel. Peterson rightly remarks that the numerous allusions in John to Zech. 9-14 as the basis for his eschatological hope do not preclude John’s allusions to Ezek. 40-48, especially since it is highly probable that Zechariah is commenting on these chapters in his prophecies.

Peterson is convinced that the ‘I am’ sayings of Jesus in the Fourth Gospel are meant not least to connect Jesus to a number of Ezekelian attributes assigned to YHWH. Thirty-two times in the LXX text of Ezekiel, we find the words ἐγὼ εἰμί in relation with YHWH. Leviticus is second, with twenty-three occurrences, and Jeremiah and Isaiah come third and fourth, with thirteen and nine.

When Peterson in his study says that for John through his death, burial resurrection Jesus became the new temple from which all the blessings of the godhead flow to believers, his is completely right. I would add that he relationship  between the triumphal entry of Jesus in Jerusalem and the return of the glory of YHWH tot the new temple in Ezekiel, highlights that in John’s Gospel we can never speak of the glory of Jesus apart from his death on the cross. John gives us a theology of the cross in the form a theology of glory. Peterson could have stated this aspect even more pronouncedly.

When attention is called to Ezekiel as the background of John, the formative influence that Isaiah had upon John is in danger of being underestimated. This footnote could be placed to the in itself very useful and thought provoking study of Peterson. I would say that the mind-writer of the Fourth Gospel was both formed by Isaiah and Ezekiel, besides other OT books; they all were a part of his symbolic universe. I may add that Ezekiel himself stands in the line of Isaiah, and no less so with regard to his prophetic call. So it is understandable that it is difficult, and quite often impossible, to separate out the distinctive OT influences on NT writers.

Peterson is certainly right that Ezekiel is much more important for the author of the Fourth Gospel than is generally realized. Even if we do not find all his arguments and examples equally persuasive, this stance is hard to deny. In particular, I find his cumulative evidence very convincing: seeking to explain the influence of Ezekiel on John, Peterson suggests that John himself was attracted to Ezekiel because, among other reasons, he shared the prophet’s experience of the destruction of the temple and Jerusalem in his day.