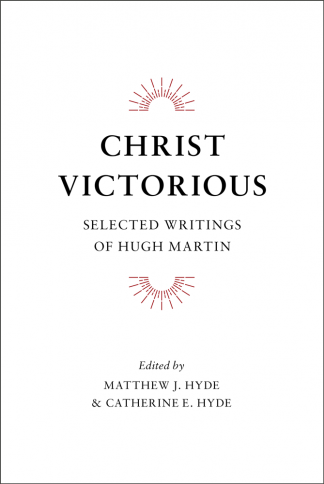 Hugh Martin (1822-1885) was one of the outstanding ministers of the Free Church of Scotland in the first decennia of her existence. According to C.H. Spurgeon no church so much resembled in the apostolic church as the Free Church of Scotland in her beginning years. Martin was born in Aberdeen on 11 August 1822. He was educated at Aberdeen Grammar School and then took an arts degree at Marishall graduating with an MA in 1839. He then took a second degree in Theology at King’s College; also in his hometown Aberdeen.

In the Disruption of 1843 he joined the Free Church faction and was one of the first ministers ordained directly into that faction without transfer from the Church of Scotland. Licensed to preach by the Free Church in 1843 he was thereafter ordained as minister of Panbirde.

In 1858 he left Panbride to take on the role as minister of Greyfriars Free Church in Edinburgh, one of the Free Church’s newly built and more impressive city monuments. He retired at the early age of forty-two year to Lasswade  south of Edinburgh in 1865 due to ill-health. However he continued whenever possible to preach and to lecture at the University  of Edinburgh and in 1872 the University awarded him an honorary doctorate DD. The rest of his time he gave to writing.

He died in Dundee on 14 June 1885. He is buried with his family in Grande Cemetery; a cemetery where several of the worthies of the Free Church were buried. Whether by accident or design he lies next to his mentor  William Cunningham. Martin was a close of among others John Duncan, George Smeaton and John Kennedy.

Today Martin is best known for his writings. He was a great expositor of the Scriptures and could masterly explain the content of the Biblical ad Reformed faith. During the years the Banner of Truth has republished several items of Martin. In 2019 sermons, essays and letters, many of which have not been republished since the nineteenth century were brought together by Matthew J. And Catherine E. Hyde in one volume and published by the Banner of Truth.  The title is Christ Victorious.

Three emphases can be detected in this volume. The first is that Martin’s view of Christ is Trinitarian. The divine Saviour who accomplished the redemption was sent by the Father and equipped by the Spirit to do this work. The second is the relationship between Word and Spirit. The believer must no go further than the inscripturated Word allows, but praying for the enlightening of the Holy Spirit he must also go as far as the inscripturated Word allows. Thirly., Martin insisted on the activeness and victoriousness of Christ’s death.

The desire of Martin in his writings was for an increased knowledge of Christ, both his person and his work. The content of demonstrate the veracity of the late professor John Murray’s assessment of Martin, that ‘his writings exhibit an unexcelled warmth and fervour. I heartily agree with Sinclair B. Ferguson that Martin’s writing should be hand in the hand over every Christian – and certainly every preacher – who appreciates the importance of sound biblical exposition and that this new selection of his sermons, essays and letters will stimulate a fresh appreciation of the wonder of the gospel.